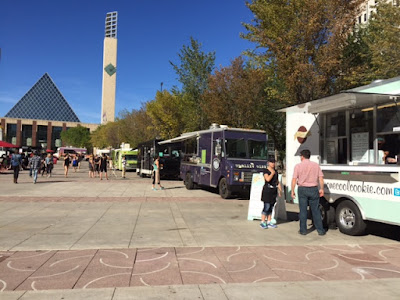 The smell of waffles, bacon, and assorted ethnic dishes met my nose as I approached Churchill Square off 100th Street. The sun was just above the tallest buildings, and curious business clad Edmontonians stopped to check out the (delicious) fuss.  My palms were already sweating with anticipation, but what should I try first?  I had already broken the cardinal rule of food festival outings- don’t come alone.  Luckily, my aunt was in the neighborhood, so crisis averted.


As I did my initial cruise to find my dishes of interest I had jotted down, there was one notable feature: the amount of space!  If anyone attended Taste of Edmonton this year, trying to find a place to sit and eat was next to impossible.  The trucks sat on the circumference of the square, and only on one side of the adjacent streets, leaving lots of room to roam truck-to-truck and find a shady spot to taste test!

After surely convincing ourselves that winter was here, the evening peaked at a whopping 26 degrees!  Gelato trucks and lemonade pushers rejoiced, and ice cream lines were a mile long.  As delectable as the frozen treats seemed, I only had one thing on my mind… Bacon! 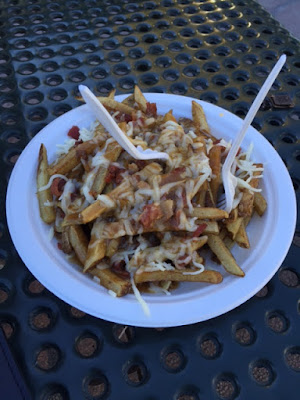 My first stop was Afterbite Mobile for their bacon poutine.  The portion was large for two people  (hence, bringing a group) and the hand cut fries were earthy tasting, and perhaps a bit undercooked.  The gravy was salty, and combined with the bacon almost made it *too* salty, but luckily the cheese balanced it out.  I was a little disappointed they didn’t use curds, as I am a traditional poutine connoisseur, but, I don’t discriminate for a little variety!  Overall, edible, but perhaps more gravy and cheese curds would amp it up.

Next we Explored India… at the Explore India truck!  Clearly, I had to pick the only item with bacon in it, so I tried the Nacon Bread.  What is Nacon you ask?  Why, it is naan bread stuffed with bacon bits, covered in cilantro and green onion, and comes with a butter chicken-esque dipping sauce.  Savoury, salty, creamy and fresh!  I was sort of on my own for this dish, and afterwards I regretted that I was almost full.  Why, oh why did I break the cardinal rule?! 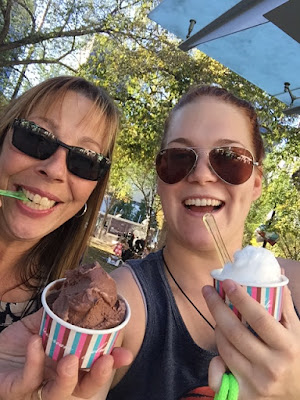 We decided to give into the sun and finish our trekking with Da Vinci Gelato, and we are glad we did. Auntie had the chocolate, and I had the lemon.  The chocolate was rich, smooth and light, while the lemon was just as refreshing as squeezed lemonade.  It was the perfect ending.

I would highly recommend checking out What the Truck next year.  The smell of the air alone is worth it! Next year, I’m coming in with a game plan, even though I realized after they have a “how to” section on their website.  Check them out on www.whatthetruck.ca and happy eating!