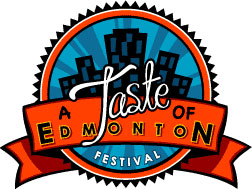 Visiting Sir Winston Churchill Square, on a summer night, during the Taste of Edmonton festival is a joy for the senses. The sights and smells, of the yearly food festival, was a sweet-smelling and mouth-watering trip for the nose and taste buds.

For those of you newcomers, the Taste of Edmonton offers samples from local eateries across the city. For only a few dollars, your belly is filled with culinary creations from all over the Globe. Whether you're into a spicy tiki masala to fried onions on perogies and everything in between, there's something for everyone at this downtown festival.

Even though foot traffic is heavy, restaurants are sure to serve you quickly, and the seemingly endless line ups are moving before you know it. As most food tents specialize in one or two dishes each, the rate of food turnover is quick, and no one will be waiting for long.

While you ponder your next food target, you see City Stage, which has live performers to keep you entertained. Bands perform musical tributes, and original songs throughout the day while patrons fill their faces, or unwind  in the licensed beer gardens or wine tent. Some attendees are even found cooling off in the free public pool outside City Hall.

As you make the rounds of the endless food tents and beer gardens, you find your stack of tickets fading away as quickly as you got it. And even though you may have run out of food and beverage coupons, you notice that you haven't spent much money at all. Twenty-five dollars could be more than enough to fill you up with the various foods, and you'll still have enough for a beer when you're done.

People call Edmonton the 'Festival City' and if you look at the summer lineup of upcoming festivals, it would be hard to disagree.  And while you sit watching the live entertainment, patrons wading in the pool outside of City Hall, or marvel at the architectural creativity of the Art Gallery of Alberta; you can't help but feel as though, this Northern City has more to offer than just a big mall.
Posted by YEG Food Guide